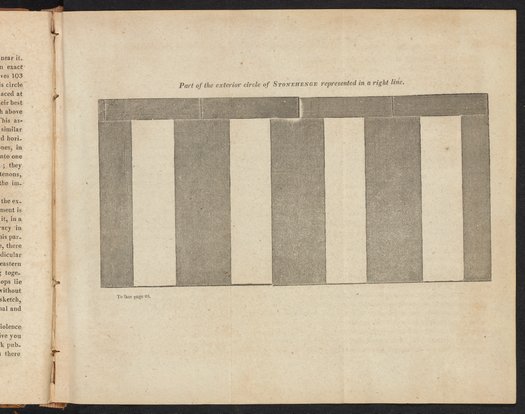 Engraved plate of part of the exterior circle of Stonehenge represented in a straight line. On page 85 Silliman clarifies that the sketch should give readers an idea of the exterior circle and that readers should be mindful that the arrangement of Stonehenge is circular, rather than linear as represented in the plate. He states that he has not attempted great accuracy in the proportions, but that he believes the sketch is "tolerably correct."

He goes on to describe the state of Stonehenge at the time of writing, saying "Of this outer circle, there are actually standing, at this time, 14 perpendicular stones, with six horizontal ones; on the northeastern side of the circle there are 11 stones standing together, without any interruption, and on their tops lie five horizontal ones, which also are continued without interruption."

Silliman, Benjamin. “Part of the Exterior Circle of Stonehenge Represented in a Right Line.” In A Journal of Travels in England, Holland and Scotland, and of Two Passages Over the Atlantic, in the Years 1805 and 1806, Vol. 2. New York, New York: Ezra Sargeant, 1812. https://digital.sciencehistory.org/works/enxa8vr.