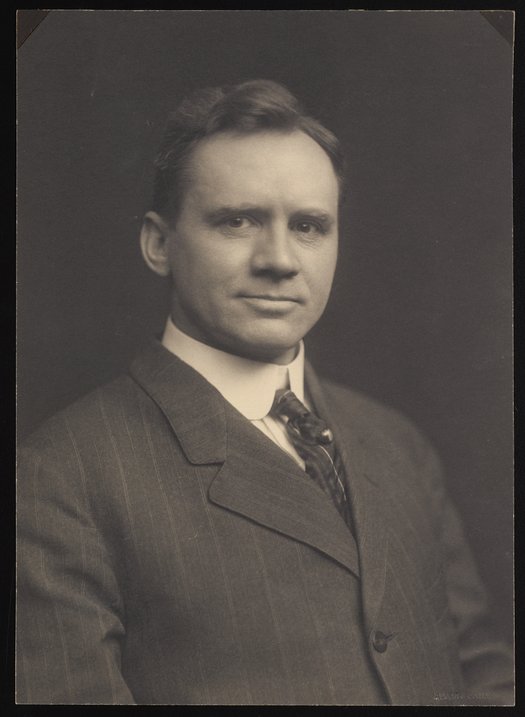 Portrait of American chemist John Edgar Teeple (1874 – 1931), best known for his discovery of a process for separating potash from borax.

John Edgar Teeple was born on January 4, 1874 in Kempton, Illinois and educated at Valparaiso University, where he graduated with a B.S. in 1892 and a B.A. in 1893. That same year, he became a professor of chemistry and physics at Fremont College (now Midland University), where he taught for five years. He was also a professor of organic and physiological chemistry at Cornell University, where he received a B.S. in 1899 and his PhD in 1903. Teeple also briefly gave a course of lectures at Columbia University in 1917 on chemical engineering and industrial chemistry.

Teeple is attributed with the discovery of separating potash from borax for the Searles Lake Project with the American Potash & Chemical Corporation. In the early 20th century, potash was one of the primary fertilizers for farmers due to its high concentration of potassium. Potash is important for agriculture because it improves water retention, yield, nutrient value, taste, color, texture and disease resistance of food crops. Through Teeple’s discovery, the American Potash & Chemical Corporation became the primary potash-producing firm in the United States, able to compete with German potash companies' prices after World War I. For this achievement, Teeple received the 1927 Perkin medal for distinguished work in applied chemistry.

For many years, Teeple served as the director and treasurer of the American Chemical Society. He also served as president of the Chemist’s Club from 1921-1922. He was a member of the Society of Chemical Industry, American Electro-chemical society, American Association for the Advancement of Science, Franklin Institute, and the American Anthropological Society. John Edgar Teeple died on March 23, 1931 in New York City, New York at the age of fifty-seven.