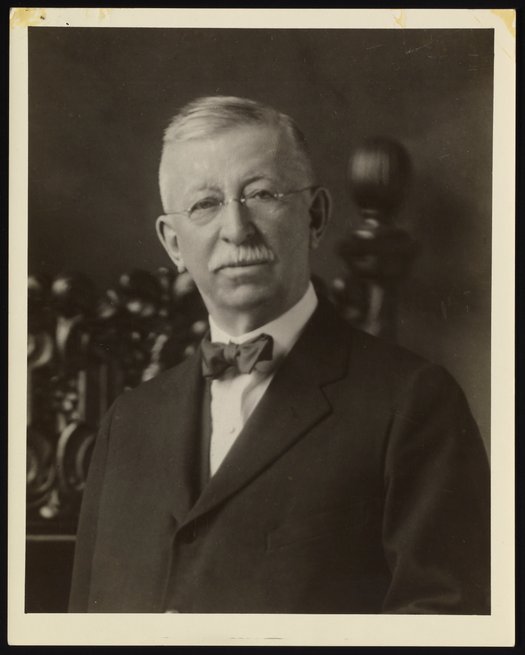 Portrait of Edgar Fahs Smith (1854-1928), a chemist and educator best known for his association with the University of Pennsylvania and the Edgar Fahs Smith Memorial Collection in the History of Chemistry.

Edgar Fahs Smith was born on May 23, 1854 in York, Pennsylvania and educated at Pennsylvania College at Gettysburg (now Gettysburg College), where he majored in chemistry and mineralogy studying under Samuel Philip Sadtler (1847-1923). Following his graduation from Pennsylvania College in 1874, Smith undertook graduate studies at the University of Goettingen, where, studying under Friedrich Wöhler, he earned his PhD in 1876. Smith subsequently served as a chemistry instructor at the University of Pennsylvania until 1881, after which he assumed academic positions at Muhlenberg College and later Wittenberg University.

Smith returned to the University of Pennsylvania in 1888 and was elected vice provost of the University in 1898. He remained in this position until assuming the position of provost in 1911. During this time, Smith was also elected President of the American Chemistry Society, a post he held in 1895, 1920, and 1921. Smith retired from teaching chemistry in 1920. Throughout his time as an influential writer and teacher, Smith earned honorary degrees from the University of Pennsylvania, Yale, Lafayette, Franklin and Marshall, Princeton, and Temple University, among others.

Over the course of his career, Smith published over 200 scientific papers and was also deeply concerned with the preservation of chemical history, collecting over 1,000 books on alchemy and chemistry, as well as numerous portraits, prints, engravings, autographed letters, and manuscripts. Evidence of his dedication to preserving the history of chemistry, Smith co-founded the American Chemical Society’s History of Chemistry Division and was elected President of the History of Science Society in 1928. Following Smith's death on May 3, 1928, his collection of historical materials was donated to the University of Pennsylvania; The Edgar Fahs Smith Memorial Collection in the History of Chemistry opened to the public in March 1931.