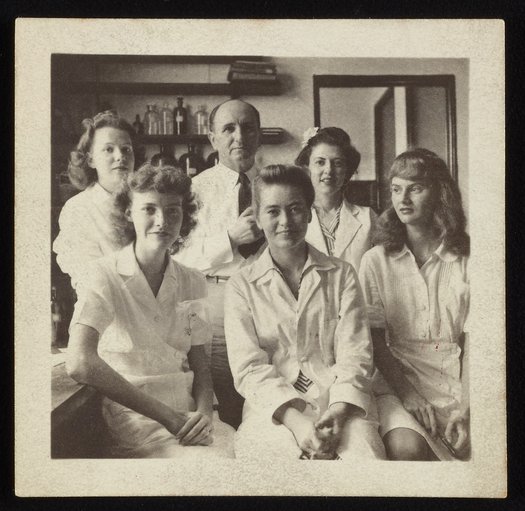 Group portrait with Dr. Michael Somogyi (1883-1971) and Dr. Irene E. Karl (1915-2006) at the Jewish Hospital of St. Louis. Dr. Karl, wearing a lab coat and striped blouse, stands next to Dr. Somogyi on his left-hand side. The remaining women in the photograph are unidentified.

A Hungarian American professor of biochemistry at the Washington University and Jewish Hospital of St. Louis, Dr. Somogyi is best known for his preparation of the first insulin treatment given to a child with diabetes in the United States in October 1922. In 1926, Somogyi became the first biochemist appointed to the staff of the newly-opened Jewish Hospital of St. Louis and remained there as director of the clinical laboratory until his retirement in 1957.

A pioneer in identifying and understanding diabetes and sepsis and an authority on muscle metabolism, Dr. Karl worked as a biochemist at Jewish Hospital from 1940 to 1943 before taking a hiatus to raise her family. She resumed her career in 1959 as a research associate at Washington University School of Medicine.