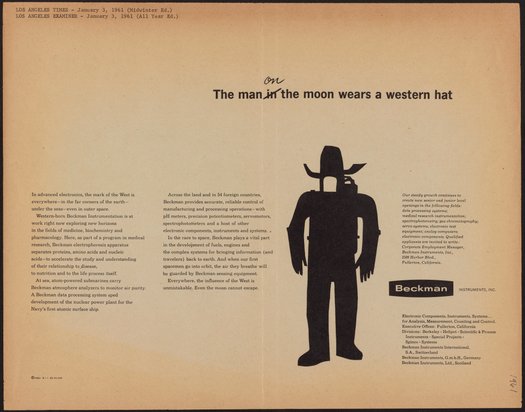 This advertisement appeals to potential Beckman Instruments employees by building on the popularity of NASA's early manned spaceflight programs. In 1961 -- the year of this advertisement -- NASA conducted its first manned spaceflight (Freedom 7), and quickly afterwards President John F. Kennedy initiated the Apollo program, with the goal of putting a human on the moon. Although that goal was not achieved until Apollo 11 in 1969, in the intervening years Beckman Instruments contributed the Gemini project (1961-1966). Beckman's instruments were used to develop some of the technology that made spaceflight possible, but also the company also created instruments that would monitor astronauts' health and respiration.

The man on the moon wears a western hat