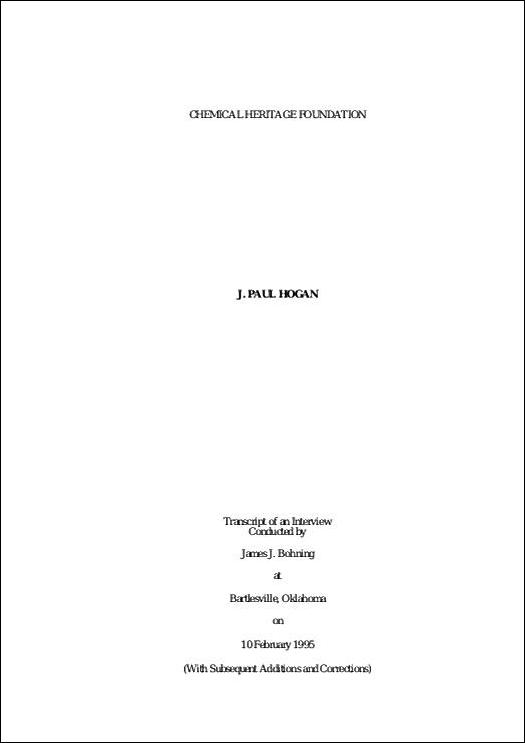 The interview begins as J. Paul Hogan discusses his family background and early education in Lowes, Kentucky. Next follows a description of Hogan's college education at Murray State and teaching experiences at the high school and college levels. The central portion of the interview focuses on Hogan's career with Phillips Petroleum Company, which began after his position teaching physics at Oklahoma A&M was eliminated. Hogan's first work at Phillips was with Grant Bailey and Alfred Clark on double bond shifting. After about five years, he switched to the Fischer-Tropsch project, preparing and commercializing a process for the production of hydrocarbon. Next Hogan worked with Clark, and eventually others, beginning by investigating the nickel oxide catalyst and using it to produce 223-trimethylpentene and 223-trimethylpentane. Ultimately Hogan and Banks discovered polypropylene, and the interview examines some of the many patents and papers stemming from this research.

Throughout the interview, Hogan comments on his relationships with Clark, Bailey, Robert L. Banks and Clarence Lanning. He also discusses the reaction of Phillips' management to the production of polymers, the work and decisions leading to the commercialization of polyethylene before polypropylene, and the legal situations surrounding the commercialization of polypropylene. Towards the end of the interview, Hogan examines Phillips' attitude toward publishing, records retention, and R&D; his own work on copolymerization; and his views on the research process and the roles of theory and intuition in it. The interview concludes with a discussion of the meaning of the Perkin Medal and the future of chemical R&D.