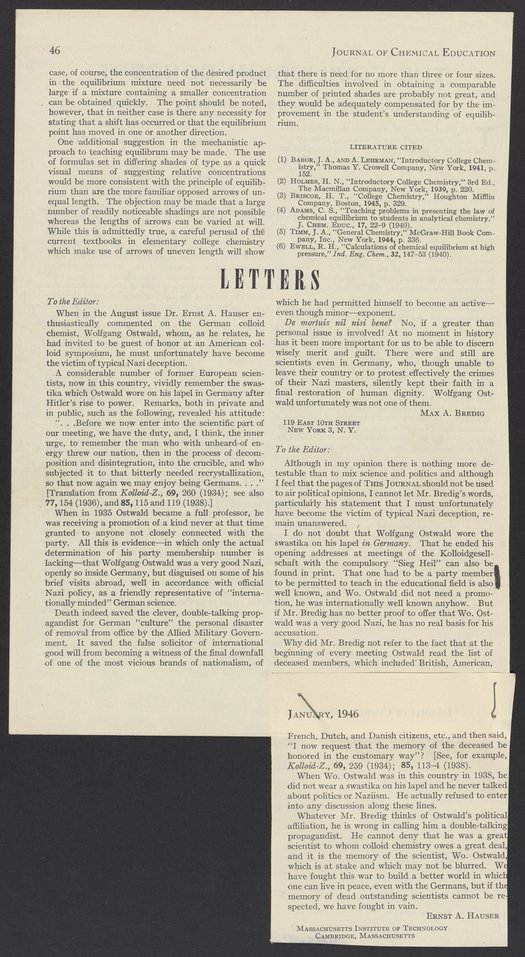 Clipping from the Journal of Chemical Education containing two letters to the editor. The first, by Max Bredig (1902-1977), was written in response to an article by Ernst A. Hauser (1896-1956), which praised Wolfgang Ostwald (1883-1943). Bredig states that Ostwald was a member of the Nazi party and that his political affiliation should be acknowledged. The second letter is written by Hauser in response to Bredig's letter. Hauser defends Ostwald and continues to praise his contributions to colloid research.

Wolfgang Ostwald, the son of renowned chemist, Wilhelm Ostwald (1853-1932), became a full professor of chemistry at the University of Leipzig in 1935. In his letter to the editor, Max Bredig points out that anyone hired or promoted as a professor at the University of Leipzig at this time was considered to be closely connected to the Nazi party. Hauser wrote in response that Ostwald's promotion was based on merit, and not political affiliation.

Journal of Chemical Education Letters to the Editor, January 1946