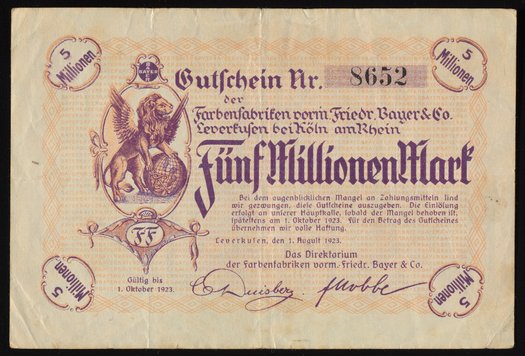 This Fünf Millionen Mark Gutschein, or five million Mark voucher, was issued by Friedrich Bayer & Company. Design includes a cartouche containing a winged lion with caduceus and globe as well as the Bayer logo. The verso was overprinted with the plant site and was signed by the plant manager. Paper features a watermark design.

The Friedrich Bayer & Company initially manufactured synthetic dyes before expanding their industry to include pharmaceuticals, notably Aspirin, as well as other products including polycarbonates and polyurethanes. The particular plant listed is the Weiler-ter Meer plant, named after Edmund ter Meer, a German chemist who discovered the ter Meer reaction for dyes. The Weiler-ter Meer Company later merged with Bayer.