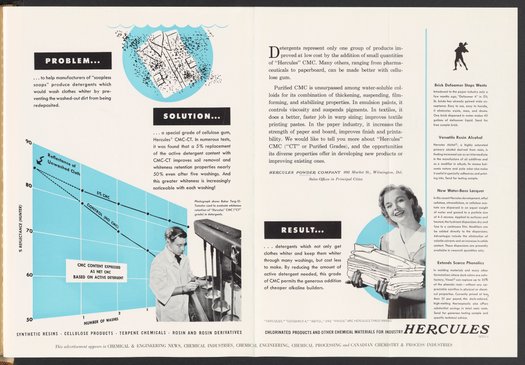 Two-page color print advertisement for Hercules CMC, unpurified cellulose gum manufactured and sold by Hercules Powder Company for use in detergent products. The advertisement shows a graph representing the effectiveness of Hercules CMC at retaining the whiteness of fabric when added to detergents. The advertisement also includes inset photographs of a man in a lab coat operating a piece of testing equipment, and a woman holding a stack of laundered shirts. The accompanying text describes the many applications of Hercules CMC for detergents, textiles, and papermaking. The sidebar lists other available Hercules products, including Vinsol Resin, "Defoamer 4" and Abitol, an alcohol derived from rosin. This advertisement appeared in Chemical & Engineering News, Chemical Industries, Chemical Engineering, Chemical Processing, and Canadian Chemistry & Process Industries.