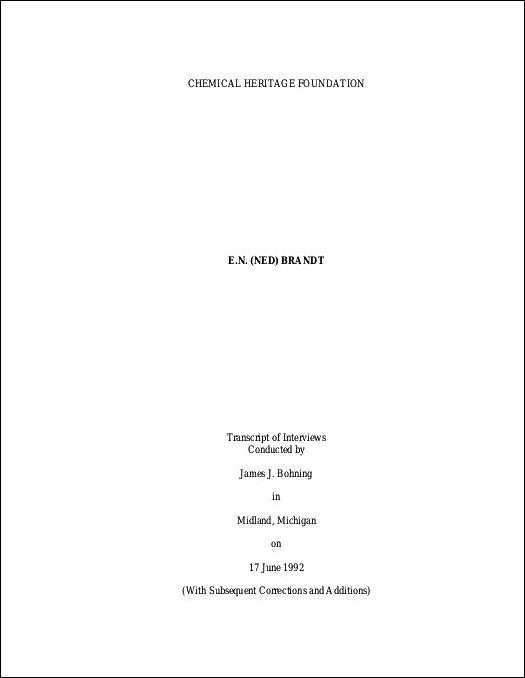 E.N. (Ned) Brandt, company historian of The Dow Chemical Company and a major figure in Dow's public relations activities for over three decades, begins the interview by touching on his family background and early education, before recalling his activities in news writing positions during high school and journalism school at Michigan State.

Brandt joined a quartermaster ROTC unit in 1941, went through Officer Candidate School, and in 1944 volunteered for overseas duty. He describes several interesting experiences during the war in France when he was an intelligence officer and a public relations officer. After a brief stint with UPI in Detroit, Brandt returned to France and worked for the French broadcasting system and the State Department at the Paris embassy. He discusses his work in France, art studies in Paris, and travels to Algeria.

In 1953 Brandt resigned from the foreign service and joined Dow. This section of the interview includes recollections of Dow's early public relations department and Bud Smith, and work with Bill Schuette as public relations manager of the newly created Midland Division. Brandt next discusses his concerns as assistant director and then director of public relations in the 1960s, including such topics as Dow's global reorganization in 1965, speech writing for Dow's top executives, environmental issues, The Dow Story, and outside involvement with public affairs organizations. In describing his activities during the 1970s and 1980s, Brandt talks about a visit to Chile, public relations in South Africa, difficulties with Mark Batterson during Zoltan Merszei's tenure as president of Dow, the TV Hot Box, the origins of Dow's history function and the Dow archives, his own decision to retire, and the Futures Initiative. The closing segments of the transcript focus on Brandt's outside activities, especially for historical societies and foundations.