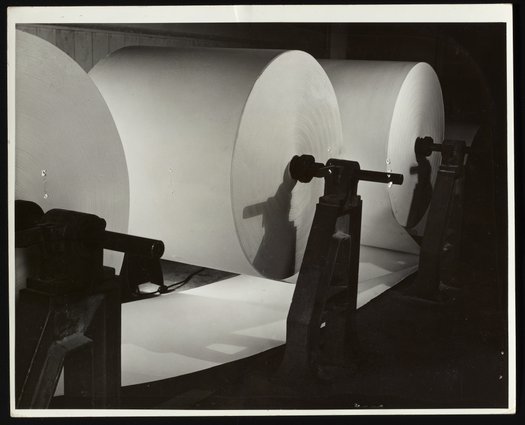 Close-up view of several rolls of sheeted cotton linters mounted on spindles at the Hercules Powder Company's Ethyl Cellulose plant in Hopewell, Virginia. Per notations accompanying the photograph, the cotton was mounted on spindles before being fed into a disintegrator; from there, the shredded pulp was pneumatically conveyed into a charging hopper. At the Hopewell plant, raw cotton linters were used to make "chemical cotton," a purified cellulose commonly used for the manufacture of cellulose ethers, i.e. water-soluble polymers that have a variety of uses as thickeners, binders, and water-retention agents in products ranging from ceramics and paints to food, cosmetics, and pharmaceuticals.