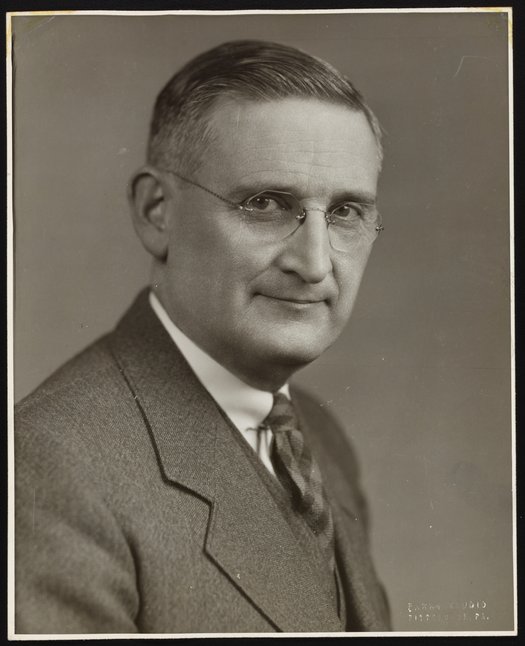 Portrait of American chemist Francis Cowles Frary (1884-1970), best known for his work with phosgene gas and the production of aluminium.

Francis Cowles Frary was born on July 9, 1884 in Minneapolis, Minnesota and educated at the University of Minnesota, where he earned a Bachelor’s degree in analytical chemistry in 1905, a Master’s degree in 1906, and a PhD in 1912. Frary worked at the University of Minnesota as Assistant Professor of Chemistry from 1911 to 1915 before joining the Oldbury Chemical Company in Niagara Falls as a research chemist. At Oldbury, Frary became an authority on the production of phosgene gas, a colorless alternative to chlorine gas that was in high demand for use in chemical warfare during World War I. During the war, Frary oversaw the design and construction of a phosgene plant at Edgewood Arsenal in Maryland and later assumed the position of director of research at the Aluminum Company of America in December 1918.

At the Aluminum Company, Frary notably oversaw the first production of pure aluminum by electrolytic refining and the production of pure alumina by electro-thermal processes; both developments would help produce stronger and harder alloys for use in new airplane designs. For these accomplishments, Frary was awarded the Pittsburg Award from the Pittsburg section of the American Chemical Society (1936), the Edward Goodrich Acheson Gold Medal in 1939, and the Perkin Medal in 1946. Frary also served as president of the Electrochemical Society from 1929 to 1930. Francis Cowles Frary died on February 5, 1970 in Oakmont, Pennsylvania.