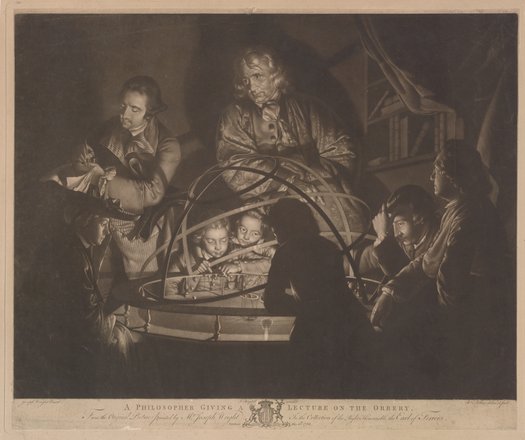 Wonder, curiosity, and deep thought: the audience in this mezzotint, after a painting by Joseph Wright of Derby, models a range of possible responses to science. At center, a brass orrery--a device used to model the arrangement and rotation of the solar system--is operated by a lecturer. A candle has been placed to represent the sun, allowing the lecturer to demonstrate the mechanics of an eclipse, and allowing the painter to make use of deep chiaroscuro shadows for dramatic effect. Highlights and reflections illuminate the faces of those listening, from the contemplative young woman in pearls at left, to two playfully attentive children at center, to a young man at right who shades his gaze with one hand as if lost in thought.

A Philosopher Giving a Lecture on the Orrery