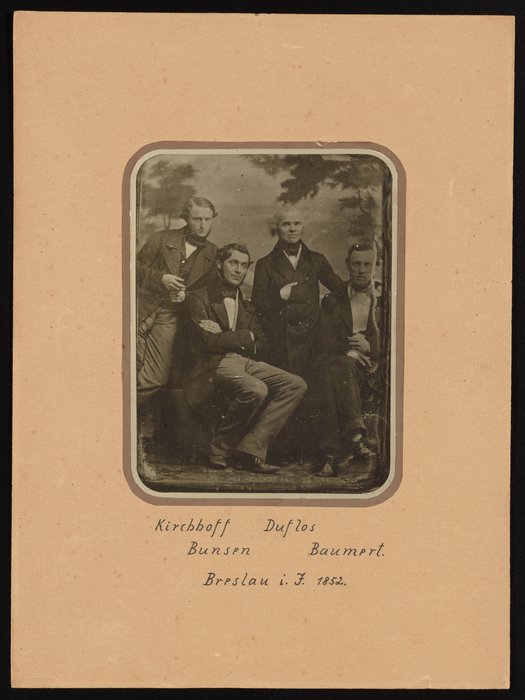 Baumert was a German physician and chemist. He worked as a doctor before completing his habilitation at the University of Breslau in 1853 and then was promoted to professor. It is unclear if he is a student or an employee of the university in this photograph.

Bunsen was a prolific German chemist. Bunsen's most important work was in developing several techniques used in separating, identifying, and measuring various chemical substances. He and Gustav Kirchhoff invented the spectroscope and discovered the elements cesium and rubidium. Bunsen was briefly a professor at the University of Breslau between 1851-1852.

Duflos was a French, German chemist. In 1842, he became the director of the pharmacy institute at the University of Breslau. In 1846, he became an associate professor of pharmaceutical chemistry at Breslau, attaining a full professorship in 1859.

Kirchhoff was a German physicist who is known for his circuit laws, his contribution to the field of spectroscopy, and for coining the term "black-body radiation". In 1850, he became a professor at the University of Breslau.

Scientists from the University of Breslau, 1852