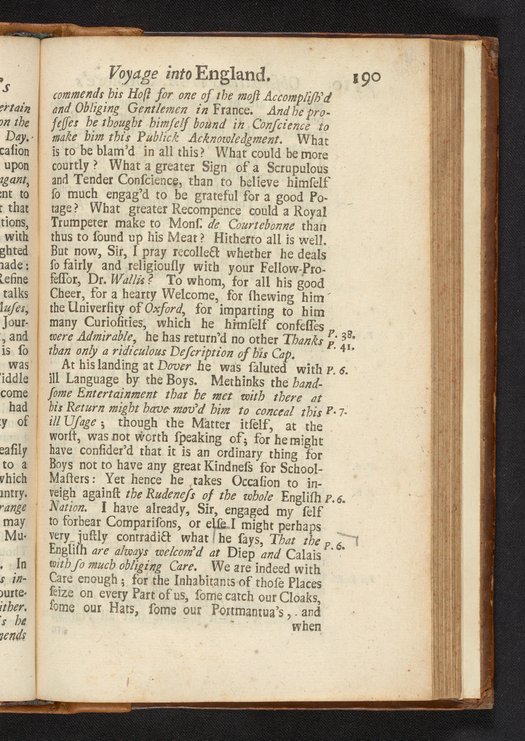 This page is from A Voyage to England: Containing Many Things Relating to the State of Learning, Religion, and Other Curiosities of that Kingdom, published in 1709. This page is notable due to the existence of a typo in the printing of the page number, located at the top right-hand corner of the page. Chronologically, this should be written as page 109, but the page reads 190 instead.

This book is an English translation of the French original, written in 1664. Written after Monsieur Sorbière spent three months in 1663 in England, this book details his thoughts on several different topics. During his travels he had the opportunity to meet with many well-known scientists and physicians. The first section includes a memoir of his life, written by Mr. M. Graverol. The second section is that of Sorbière's observations on his travels through England. This section contains a plate of a mathematical representation of a "Model of a Floor." The third section is the thoughts of Thomas Sprat, historian of the Royal Society, on Sorbière's observations, written to Dr. Wren, Professor of Astronomy at Oxford University. The final section is a letter from Monsieur Sorbière to Monsieur de Courcelles at Amsterdam regarding the Anglo-Dutch War of 1652-1654. The book also contains several one to two page sections of letters to the reader.

Sorbière, Samuel, M. Graverol, and Sprat, Thomas 1713. “Page 109, Printed as Page 190.” In A Voyage to England: Containing Many Things Relating to the State of Learning, Religion, and Other Curiosities of That Kingdom. London, England: J. Woodard, 1709. https://digital.sciencehistory.org/works/62eebzc.