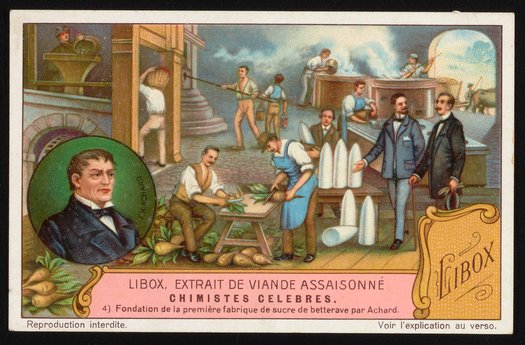 Illustrated trade card depicts German (Prussian) chemist, physicist, and biologist Franz Karl Achard (1753-1821) walking through a sugar beet refinery, with view of workers illustrating various stages of the production of sugar from beets. The trade card also features an inset bust of Achard. Verso includes an advertisement for Libox's Seasoned Beef Extract, as well as a biography of Achard.

Franz Karl Achard is best known for his discovery of a method for producing sugar from sugar beets. In 1801, with support from King Friedrich Wilhelm III of Prussia, Achard opened the first sugar beet refinery. Notably, the refinery proved vital to Prussia during the Napoleonic Wars of the early 19th century, during which Napoleon placed restrictions on cane sugar imports.