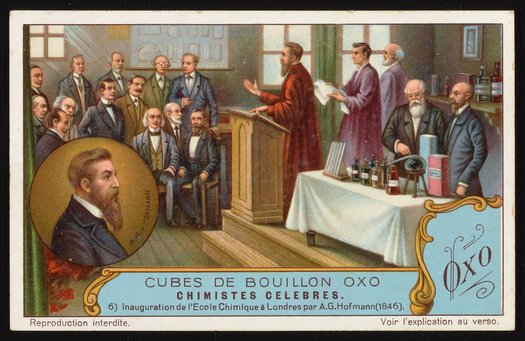 Illustrated trade card depicts German chemist August Wilhelm von Hofmann (1818-1892) at the inauguration of the School of Chemistry in London in 1846, of which Hofmann served as the first director. Men stand at a table with scientific instruments. The trade card also features an inset bust of Hofmann. Verso includes an advertisement for Liebig's Oxo bouillon cubes, as well as a biography of Hofmann.

August Wilhelm von Hofmann (1818-1892) was born on April 8, 1818. He studied under Justus von Liebig, and was himself the teacher of Fritz Haber and William Henry Perkin. He was an organic chemist who specialized in aniline and naptha. The Hofmann rearrangement, the Hofmann elimination, and the Hofmann–Löffler reaction were all the results of his research. He died on May 5, 1892.