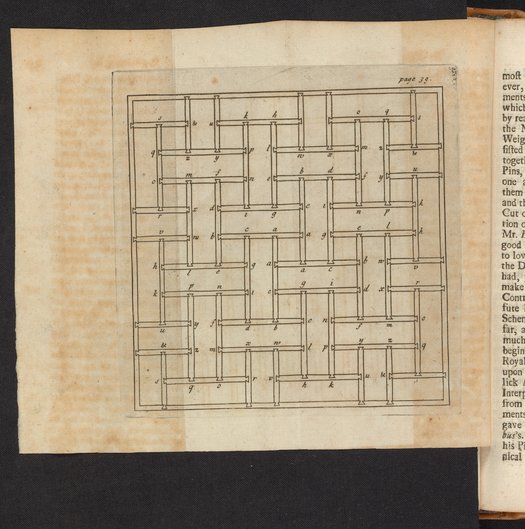 This plate from A Voyage to England: Containing Many Things Relating to the State of Learning, Religion, and Other Curiosities of that Kingdom. It depicts a floor plan Samuel Sorbière (1615-1670) saw during his visit to Oxford. The plan is a model of a floor that could "bear a great weight, and make a very large hall, [even though] it consisted of only several short pieces of timber joined together, without any mortises, nails, and pins, or any other support than that they gave one another." He explains that this makes them seem as if they are "but one board and the floor all of a piece." He expresses his admiration for the professors at Oxford who are working on this experiment.

Sorbière, Samuel, M. Graverol, and Sprat, Thomas 1713. “Model of a Floor.” In A Voyage to England: Containing Many Things Relating to the State of Learning, Religion, and Other Curiosities of That Kingdom. London, England: J. Woodard, 1709. https://digital.sciencehistory.org/works/jtwg8ml.

Model of a floor