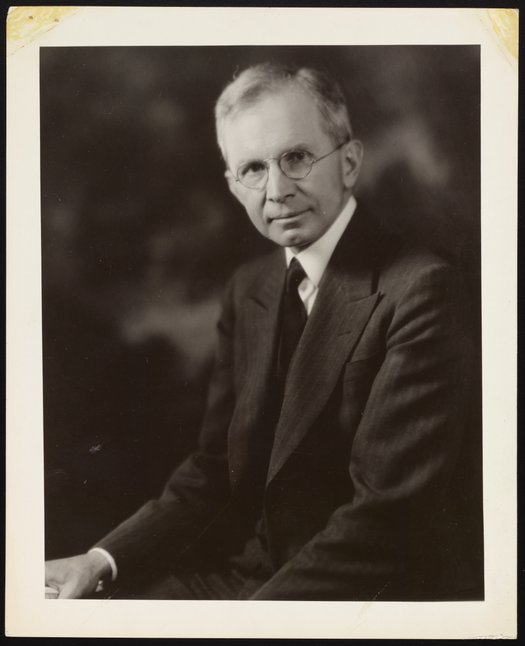 Portrait of George Oenslager (1873-1956), research chemist for the B. F. Goodrich Company known for the discovery and industrial application of organic accelerators to rubber.

George Oenslager was born on September 25, 1873 in Harrisburg, Pennsylvania and educated at Harvard University, where he graduated with an A.B. in 1894 and a Master’s degree in 1896. After graduating from Harvard, Oenslager worked at the Warren Paper Company in Rumford, Maine as a pulp and paper chemist for nine years. In 1905, Oenslager entered the rubber industry, specifically, the B. F. Goodrich Company (previously, Diamond Rubber Company) where he was hired to investigate the problem of acceleration of low-grade rubber. He was awarded the Perkin Medal in 1933 and the Charles Goodyear Medal in 1948 for his discovery of organic accelerators such as aniline and thiocarbanilide, which were compounds crucial to the commercialization of natural and synthetic rubber. He was also awarded the degree of Doctor of Science by the University of Akron in 1939. Over the course of his career, Oenslager served as chairman of the Akron section of the American Chemical Society, as well as chairman of the Akron chapter of the Archaeological Institute of America. He was a member of the Institute of Chemical Engineers, the Institution of the Rubber Industry, and the Harvard Fund Council. George Oenslager died on February 5, 1956 in Akron, Ohio.