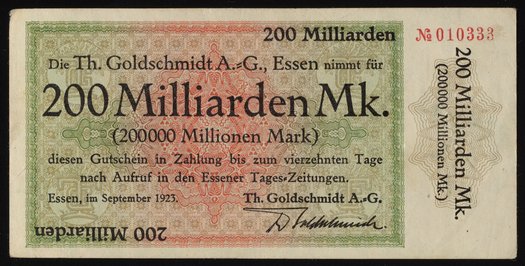 This 200 Milliarden Mark Gutschein, or two billion Mark voucher, was issued by Th. Goldschmidt A.-G.. Styled after a banknote, the verso of this company scrip includes the company's monogram. Paper watermark features a triangle within a larger triangle design.

A leading company in the chemical industry, Th. Goldschmidt A.-G. was the second-largest European tin refinery by the turn of the century. The aluminothermic thermite process they employed was used to produce carbon-free metals such as chrome, ferrochomium and manganese. The thermite process was utilized in transportation systems as the main method to weld rails for streetcars and railroads.