This collection, the bulk of which is digitized here, consists of photographs of buildings, laboratories, and equipment associated with the Fixed Nitrogen Research Laboratory, Arlington Experimental Farm, and several other U.S. Department of Agriculture sites in the 1920s through the 1950s. The photographs were collected by Travis P. Hignett, a chemist who worked in fertilizer research at the Fixed Nitrogen Research Laboratory. The majority of photographs date from the 1920s and 1930s and depict numerous stages of the nitrogen fixation process and the various equipment and apparatus used in the production of atmospheric nitrogen, including generators, compressors, filters, thermostats, and vacuum and blast furnaces. The collection also includes several photographs of U.S.D.A. exhibit booths from industrial expositions and trade shows, including the 1926 Sesquicentennial Exposition held in Philadelphia, as well as portraits of various laboratory and U.S.D.A. personnel. 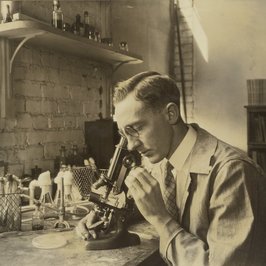