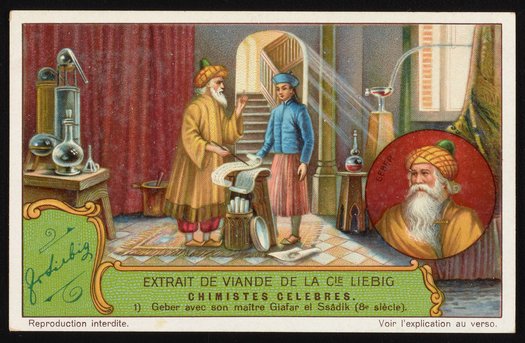 Illustrated trade card depicts 8th-century Arabic polymath Abu Mūsā Jābir ibn Hayyān (c. 721-c. 815), westernized by Europeans as "Geber," speaking with his teacher Giafar el Ssâdik. They stand over a scroll with scientific instruments visible to their left and right. Also includes an inset bust of Jābir. Verso is an advertisement for Liebig's Extract of Meat along with a biography of Jābir.

Known as the father of chemistry, Jābir authored works on numerous subjects including alchemy. He is credited with devising the oldest systematic classification of chemical substances.