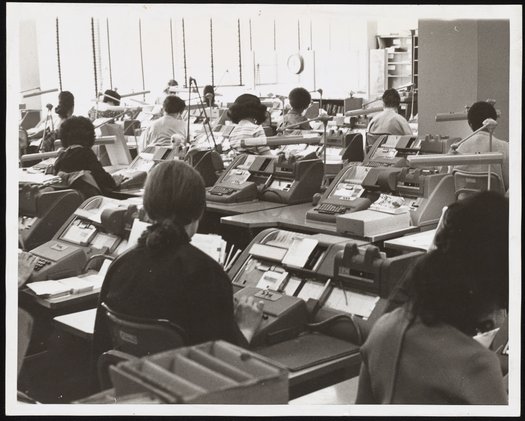 A black and white photographic view depicting a room of employees at the Institute for Scientific Information (ISI) in Philadelphia. The ISI was an academic publishing service, founded by Eugene Garfield (1925-2017) in 1956. ISI offered scientometric and bibliographic database services and specialized in citation indexing and analysis.

The photograph was taken from the back of the room, capturing the backs of the employees. The majority of the employees appear to be female. Each is seated at an IBM 526 Printing Summary Punch machine creating punch cards, also known as Hollerith cards or IBM cards. The holes punched in these paper cards were used to represent computer data and instructions. They were a widely-used means of inputting data into early computers.

Unidentified employees of the Institute for Scientific Information at work