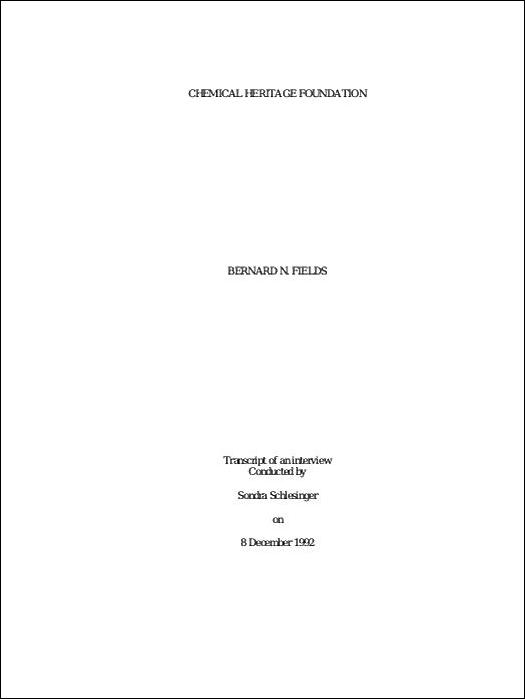 Bernard Fields begins the interview with a discussion of his early years, growing up in Brooklyn, New York. Fields was encouraged by his parents to excel in scholastic endeavors. After graduating high school at the age of sixteen, Fields enrolled at Brandeis University. After a mediocre start, he finished college at the top of his class, receiving an A.B. in biology in 1958. Fields loved biology and wanted to become an M.D. He attended New York University School of Medicine, earning his M.D. in 1962. While at NYU, Fields first became interested in neuroscience and how diseases affect the central nervous system. He then received an internship with Beth Israel Hospital in Boston, where he became involved in infectious diseases. After completing his doctoral training, Fields took a fellowship in infectious diseases with Mort Swartz at Massachusetts General Hospital.

Infectious diseases fascinated Fields and he began to move toward a career in microbiology and virology. In 1967, after two years of military service in Atlanta, Georgia, with the Centers for Disease Control, Fields moved back to New York with his new wife and three stepchildren, accepting a research fellowship with Wolfgang K. Joklik at Albert Einstein College of Medicine. While at Einstein, Fields began research on Reovirus, which would become one of his life-long research projects. His research focused on the genetics of Reovirus and how the virus interacted with animal cells. In 1969, Fields became Associate Professor of Medicine and Cell Biology at Einstein, and held that position until 1975, when he joined the faculty at Harvard Medical School as Head of Infectious Diseases. With his research fellows, Fields studied different strains of Reovirus and how they mutated to cause different diseases. Fields became Chairman of the Microbiology and Molecular Genetics Department at Harvard in 1982, ending his extensive research in infectious diseases just as AIDS hit the world scene. Fields concludes the interview with a discussion of the future of biological research, developing working relationships with students, and his personal battle with pancreatic cancer.