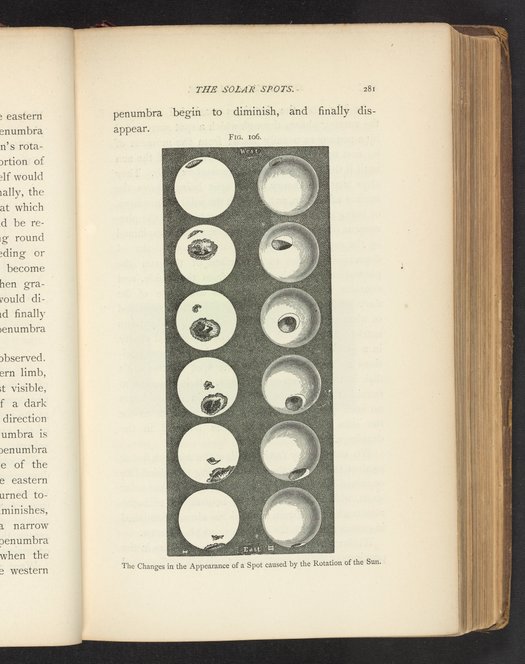 Here Sschellen is illustrating and explaining the phenomenon of sunspots. The accompanying text states: "In Fig. 106 the drawings marked I represent the varying phases through which a spot surrounded by a penumbra usually passes from the moment of its first appearance on the eastern limb of the sun until it disappears again at the western limb. They show that the theory of the spot being above the surface of the sun, as a cloud in the solar atmosphere, or being on the surface itself, is untenable; the phenomena observed, however, can be at once explained by the supposition that the spot is a conical-shaped depression in the outer surface of the sun (the photosphere), which expands from inside, and contains in its deepest recesses the cause of the dark umbra, while its sloping sides are composed of what appears to us as penumbra. The drawings marked II represent such a conical-shaped cavity in a globe shown in perspective in the same positions as those occupied by the spot on the sun's disk in the first set of drawings."

Schellen, Heinrich. “The Changes in the Appearance of a Spot Caused by the Rotation of the Sun.” Paper. Spectrum Analysis in Its Application to Terrestrial Substances, and the Physical Constitution of the Heavenly Bodies. London, England, 1872. https://digital.sciencehistory.org/works/jh343t29w.