This collection, a portion of which is digitized here, consists of photographs that span the career of American chemist and American Chemical Society president (1965) Charles C. Price (1913-2001). Photographs include studio portraits, as well as candid images of Price at work in the laboratory and lecturing at various universities. Notably, most of the photographs are staged in such a way as to obscure the fact that Price is missing his right hand, which he lost in an accident with a box of exploding dynamite caps at age six. 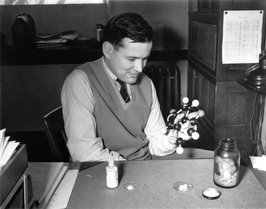